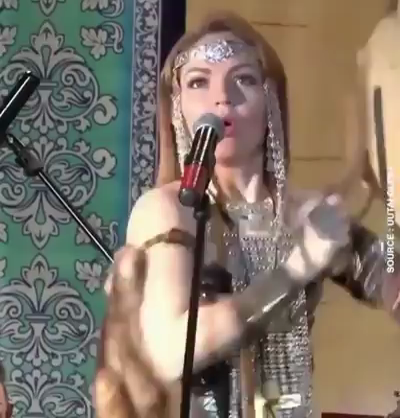 The woman performing in this video is Olena Uutai (Facebook n.d.; Note 1, Note 2). She is a member of the Yakut ethnic group, a Turkic people that live in the Sakha Republic (Yakutia) in Russia. They engage in animal husbandry around cattle and horses. Around half the population of Sakha Republic are Jakuts, with the second largest group, at around 40 percent, being Russians. Given the Yakut's racial, cultural, and linguistic background, they differ, together with the Russian ethnic group, fundamentally from other ethnic groups in Sakha Republic.

Apart from Russians and Yakut, a number of very small ethnic groups live in Sakha Republic. The most important are Chukchi, Evenks, Evens, and Tatars. They are the original inhabitants of Sibir, belong to very different racial groups than Jakut and Russians, and speak very different languages. Prior to the occupation by Russia most of them had a nomadic subsistence pattern based mostly around reindeer. They practiced various forms of shamanism (Note 3).

Olena Uutai refers to her music as "Neo Shaman". Her performances and musical form of expression, including clothing and instruments (in this video she uses mouth harp and the flat drum which traditionally have been used by shamans in ethnic groups and indigenous peoples that live in the circumpolar area in the Arctic) are not based in Yakut culture. Instead it seems to be based in cultural forms of expression found among the very small ethnic groups that live in Sakha Republic, and elsewhere in the Sibir. Or, maybe more correctly, she uses the cultural and musical forms of expression that formerly existed among these ethnic groups, prior to the acculturation process as a result of mainly Russian influence. It follows that this video present a hodge-podge of inspiration from various cultures, as put together and performed by Olena Uutai. And she is very good. I am particularly impressed with her performance on the mouth harp.

I do not know what she thinks about this. Does she understand herself as presenting or communication these for her foreign forms of cultural expressions, even though not on behalf of the ethnic minority cultures? Or is this a straightforward appropriation of cultural forms for the express purpose of making a living? If so, I guess she is trying to make us believe that this form of musical expression is her own, that it is authentic. This would not be very hard to do – nobody knows anything about the Sakha Republic and the ethnic groups who live there. And we, the audience in far away countries and cultures, are easily duped. From her Youtube channel (YouTube n.d.) it appears that she lives in USA, and that she makes a living through producing videos and CDs. As for the videos there is an obvious sensous touch to at least some of them (check them out on YouTube). References to "Mother Earth and its healing love" are likewise not comforting.

Posing as a member of another ethnic group for the purpose of benefitting from this is of course common. Here are three examples:

One could, perhaps, try to understand the phenomena of cultural appropriation as an unavoidable consequence of globalization. That is, as a positive case of cultural syncretism. However, even so, the owners of the intellectual property that has been appropriated should in all cases have the last say (Wikipedia n.d.d.). I have an idea what their response would be ...

As for the case of Olena UutaI, in spite of the seemingly overwhelming evidene to the contrary, I will postpone judgement until such time as I receive proof, one way or another.