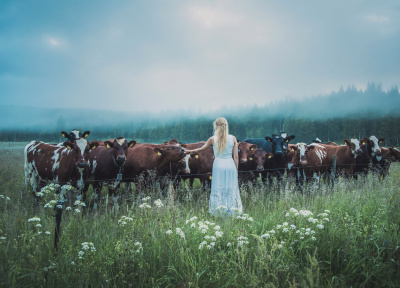 In this video Jonna Jinton from Sweden sings a home-made adaptation of old Scandinavian cattle calls (Facebook n.d.a., n.d.b.). A cattle call was a traditional way of calling the cows back from the pastures. This type of song, cattle call (called "kulokk" in Norwegian) was used by women who both looked and dressed very differently, and also sang differently, and it ceased to be used more than 100 years back.

As a Norwegian I get upset at this misuse of the old Norwegian folk culture trait of using cattle calls to get the cows to return to the farm for milking. Nothing here is traditional – very long, blond, loose-hanging hair, a white, sensuous nightgown, and the fact that it is late evening (when cows normally since long would have been milked).

Why Is This Not Good?

Because it is NOT an effort to present old Norwegian folk culture. Instead it is an effort to emulate values and emotions that some people want to present and share about what Norwegian folk culture is (read: was). Even more to the point: this is an effort to portray a picture of Norwegian culture that they, as well as foreigners/outsiders, want to hear, see, and believe in. That is, Norway – and Scandinavia more generally – as a nature-focused, sensuousness-in-nature, romantic, mystic place, one that is inhabited by tall, blond, beautiful people. On a generalized macro-level, this type of activity contributes importantly to creating wrong facts and truths – of constructing myths, as it were. This happens when we are so removed from reality that we end up with stereotyped views about other countries, cultures, and people. This does not further realism, understanding, and communication between peoples and cultures.

Why Is This Done?

There are at least three different sets of rationales at work here:

Oh, by the way, the cows do not come because of the "old vibrations in the calling tones" (another effort to create mysticism and mythologize that has no base in reality). And the argument that this is "a stunning example of humans interacting with nature" is pure nonsense. It is also not a case of "mastering an old technique" as it is the simple fact that the cows come when anybody calls. They come because they are curious, because it is evening, because they, like us, are creatures of habit, and, finally, because their udders are full and they want to be milked. It is a case of straightforward Pavlovian reflexes.