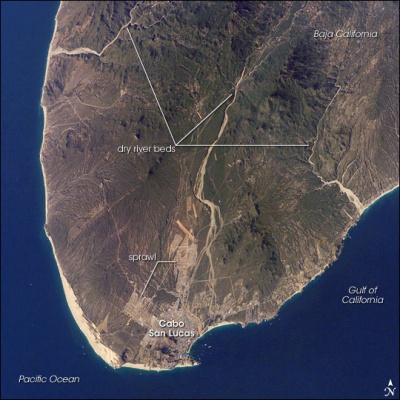 The so-called bucket lists of places to visit is a growing phenomena. On the one hand such bucket lists express long-term wishes or plans to travel to certain cultural and natural phenomena of reknown. On the other hand they point to increasing concerns with international mass tourism.

I traveled in Mexico in the early 80s, along Baja California all the way down to Cabo San Lucas on the southern tip. We – a group of students at University of California Los Angeles on Christmas / New Year vacaion – werej ust about the only tourists. Cabo San Lucas was a small, sleepy, placid fishing village of maybe a few hundred people where life was quiet and peaceful. There were few roads, none of which were paved. There were beautiful, untouched, and empty beaches all around. We went to Christmas mass in the local church and were warmly welcomed as the only outsiders (it took place outside under a starry night as the church was being repaired). We slept on the beach just east of the village. We traveled back to UCLA with fond and lasting memories of a very special place.

Since then development came to Cabo San Lucas. In 2015 it had 81,000 inhabitants, and a metro population of 306,000 (Wikipedia n.d.). If we traveled back today we would not recognize the place. Here are descriptions of the Cabo San Lucas of today from selected tourist websites:

Cabo San Lucas, a resort city on the southern tip of Mexico’s Baja California peninsula, is known for its beaches, water-based activities and nightlife.

As a well-known destination for both spring breakers and A-list travelers in need of a getaway, Cabo San Lucas has definite vacation cred.

Some call it "development," although "modernization" would be a more correct label. Others, including any locals that might still be around, more likely see it as destruction of a culture, a way of life, and the local environment (terrestrial and aquatic). The profit likely seldom ends up in their pockets. This happens not just in Cabo San Lucas, but elsewhere in Mexico and, in fact, throughout the world. Apart from differences in climate, such tourist magnets look alike, and often end up as bad copies of Western imagination. This is only natural as those involved in developing such tourism magnets, from financiers via architects to management, are outsiders, that is, from the West, writ large. The local culture, environment, and architecture become repackaged to appeal to a Western (read: non-local) idea of what international tourism destinations should look like. What we get instead of the original and traditional is cultural uniformity, through and through. And then there is the environment – beach ecosystems chewed up and spat out again in the images of the developers, protecting some species of plants or animals here and there, and showcasing them as proof of their concern with the environment and biodiversity protection, while for the most destroying the rest. International tourism is not the way to protect biodiversity. And it is growing very fast. Forget about carbon footprints.

This is a negative and critical comment to be sure. It is not my intention to try and destroy peoples' experience with traveling. Traveling has a push and pull aspect to it, and I am here concerned with both aspects. We should actually travel less, much less. It is not good for the planet, on several levels, and it is not good for our common future. The fast growing global mass tourism, or rather the rational and driving forces behind it, is not to be preferred. When we do travel we should travel differently, be aware that there are several sides to the positive experience of traveling, not least the impact on the local culture and environment which have been more or less transformed in order to give us the promised ultimate vacation experience (Note 2).