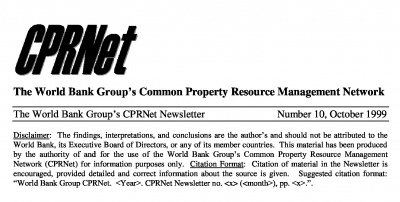 "The World Bank Common Property Resource Management Network" (CPRNet) was established in 1995 by me, with important support from my colleague Narpat S. Jodha (Note 1, Note 2). We were both at the time staff members of the World Bank, based at the headquarters in Washington D.C. CPRNet was an international network open to practitioners, policy makers / managers, researchers, and others interested in issues related to the protection and advancement of common property rights, commons, and sustainable natural resource management. This included, inter alia:

I had already in 1994 set up the World Bank network "Indigenous Peoples Net" (IPNet), which became a precursor to CPRNet (Note 3). CPRNet was from the very beginning closely connected with the World Bank. It was concerned with property rights, commons, sustainable natural resource management, partnerships, and tenurial and institutional aspects of managing natural resources. A fundamental premise for CPRNet’s work was to build local capacity.

For a correct understanding and analysis of CPRs, it is important to separate natural resources as such from the tenurial aspects of managing these resources. CPRNet was concerned with the latter institutional modalities. CPRs cover all types of natural resources which are shared by a group of people or communities, including transboundary resources covering two or more countries. A list of these resources would include the following: closed water bodies, coastal zones, community forests, mountain areas, open seas, pastures, rangelands, rivers and river basins, sacred groves, uncultivated waste areas, and wetlands. In addition, there are resources like air, climate, and open seas where the CPR is referred to as a global commons. Whether localized or global, these resources continue to be important parts of community resources in developing countries.

In comparison with privately owned and managed – as well as state-controlled – resources, CPRs play a crucial role in: (1) reducing rural poverty and inequality, (2) maintaining local-level biodiversity and micro-level environmental stability, (3) enhancing agricultural productivity and diversity, and (4) promoting collective sharing and group action. These issues constituted key areas of concern for the World Bank.

The focus of the World Bank's work had, until the establishment of CPRNet, largely been restricted to resource management issues where tenure was fairly clear, and to specific natural resources. Thus a large amount of work had been done on, for example, land tenure and administration in countries in Africa, Asia, and Latin America. There had been less focus on examining other, more complex and/or traditional, forms of tenure and management, as well as other natural resources, including aquatic areas, forests, and rangelands. This focus on one natural resource, and neglect of other resources, had sometimes resulted in damaging effects on several CPRs and those depending upon them.

CPRNet is concerned with resource management regimes that require collaborative – often group-based – action. Guided by the above considerations, as well as the need for harnessing the potential of CPRs as an important component of development strategies in its own right, CPRNet aimed to:

A list of some areas and issues that are being addressed by the World Bank and that have a CPR angle or connection, and the specific nature of these issues (including concerns, interests, and requirements), would include the following (Table 1):

Within this very broad set of areas and issues, CPRNet focussed on a smaller number of selected issues. The actual focus of CPRNet's work depended on the interest and availability of the members, and the expertise and resources at disposal. Over time the focus were expected to change, reflecting changing priorities and interests on the part of members as well as changing external priorities.

CPRNet aimed to be a community of practice for its members, and promoted exchange of information on CPR management, including the relations between CPR regimes and other property rights regimes. It was located within a general intellectual and applied context consisting of a broad, interdisciplinary, and intersectoral approach to natural resource management that at the time was emerging within the World Bank as well as internationally, aimed at sustainable local-level natural resource management within the context of a transparent, supportive, and collaborative nation state. This context emphasized sustainable development, community-based management, institutional reform, legal codification of relevant local institutions, and collaborative approaches – including partnerships, involving a wide range of stakeholders (see section "Community-Based Natural Resource Management" below). It follows that a major emphasis was placed on awareness-raising of World Bank staff and others, followed by supporting them in working with CPRs, both at the policy level and at the operational level. Furthermore, CPRNet promoted World Bank policy dialogues and investment operations aimed at supporting and facilitating CBNRM.

Of particular importance was the emphasis given to exchange of information between outside practitioners and experts, on the one hand, and World Bank staff, on the other hand, whether as members of CPRNet or not. The type of information circulated included (but were not necessarily restricted to) the following:

There is a close overlap and connection between community-based natural resource management (CBNRM) and CPRs. CBNRM is an approach to managing renewable natural resources. It encompasses a large amount of experimentation and regional variation, and it involves much learning by doing. CBNRM starts with individuals and communities as a foundation and point of departure, and it ends with individuals and communities as a permanent focus. It addresses the way in which local natural resources are utilized and managed through local institutions, and how co-management arrangements – involving communities and the state – are necessary in order to achieve sustainable management of the local resources in question.

Successful reform in each of these areas is also dependent on the ability to develop legitimate fora and processes for addressing them. These processes have the highest level of political commitment, involve all legitimate stakeholders, and are transparent and accountable.

Such institutional reform processes needs to be supplemented by concerted efforts to build human capacity at all levels – from community-based organizations to central government agencies – in order to realize the above institutional arrangements as well as administer them over time.

CPRNet had a strong dissemination and advocacy orientation, rooted in the experiences of practitioners dealing with the social dimensions of natural resource management. It included the following activities:

CPRNet members were both World Bank Group staff and others working on a range of issues relating to, or incorporating, a CPR focus.

Communication between CPRNet members, and between the members and the Coordinator, largely took place via email and the Internet.

CPRNet was a partner in the World Bank's "CBNRM Initiative" (Note 4). As a follow-up activity of this World Bank project I created the international network "CBNRM Net" (Note 5). With support from the World Bank, CPRNet proposed to IASC to established a formal partnership. In this connection I wrote an article in the IASC journal (Soeftestad 1999). The IASC Executive Board turned down the proposal, and for reasons that were less than clear and convincing.

Several documents where produced both by and on CBNRM Net. This includes: List of members, newsletters, and papers (Note 6).

The rationale for CPRNet can be summarized as follows: (1) there was increasing awareness internationally about the crucial importance of CPRs for sustainable management of natural resources, and for the well-being of large segments of the population, (2) the CPR agenda was expanding, both within the World Bank and in partnerships with outside organizations, (3) new critical analysis was forthcoming, and, (4) CPRs played a central role in the context of the World Bank's emphasis on poverty reduction, specifically in regard to risk reduction and poverty-equity-livelihood strategies.

A strategy for CPRNet gradually emerged that was focused around the intersection of CPRs and poverty reduction, within a context of strategic knowledge management and CBNRM. CPRs are central to the livelihood and coping strategies of many of the poor categories of people that are marginalized with respect to the mainstream, for a variety of reasons (ethnic, political, geographical, topographical, etc.). This strategy fitted well with the World Bank's goals, as it allowed for reaching out to stakeholders and collaborating with a range of relevant approaches and work underway across the World Bank. Importantly, it was a low-cost and effective means of reducing poverty.

As it turned out, however, CPRNet was not given enough priority by the World Bank. There were several reasons for this: