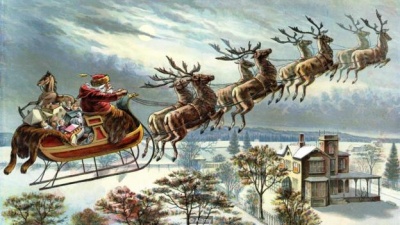 About: This article is a comment on the Concept Note for a proposed World Bank project "Christmas". It addresses primarily the project's "Santa Claus" component. The article is part of the Devblog series "Development cooperation sarcasm" (Note 7).

History: The article was prepared by staff in the World Bank's Public Sector Governance Group (seenames below). The date of the text is not known. However, the reference to the then President of the World Bank means it was written at the earliest during summer 2005. I received the document in December 2006. According to the file's metadata the comment was written on a computer belonging to one Sven Nilsson. He may have been involved in preparing the text.

The authors are to be congratulated for the ambitious scope of this proposed social development project. We have several comments and suggestions, however, many of them pertaining to the “Santa Claus” component of the project:

Regarding other components of the proposal, we suggest deleting the sections on roasted chestnuts and sugarplums. We consulted with civil society and nobody knew what those were. The section on fruitcake can stay, but should be accompanied by Freedom of Information provisions, so project beneficiaries can discover its true age and contents.

The project monitoring indicators are too ambiguous. The team should specify more clearly how it intends to measure “tidings of comfort and joy.” A recent OECD report casts doubt on the validity of the Jolliness Perceptions Index. We urge the project team instead to use more “actionable” indicators, including one first suggested by former President Wolfensohn, “the number of smiles on children’s faces.”

The pro-poor incidence of project benefits and costs appear overstated. After all, most of the redistribution envisioned for the project is within households rather than from rich to poor households.

Project risks, on the other hand, are understated. More attention should be given in this section to polar ice melting underneath the proposed “Santa’s Workshop” facility. We suggest constructing it on pontoons. The section on “office holiday parties” significantly under-predicts the risk of lawsuits, especially by female employees. Most importantly, the proposal raises serious moral hazard problems – giving away toys to children risks encouraging aid dependence and reducing their own revenue efforts.

Finally, we suggest conducting a political economy analysis of the project, to identify any special interests that might be exaggerating its potential benefits. Anecdotally, support for the project appears to be concentrated in the retail sector. While the risk may be remote, the concept note should at least recognize the possibility that the project could become commercialized.

These comments were written on behalf of the World Bank's Public Sector Governance Group by Greg Kisunko, Steve Knack, and Colum Garrity. We regret we will be unable to attend the Concept Note review meeting tomorrow morning: we plan to sleep in late following our in-depth analysis of the “egg nog” recipes provided in Appendix IV of the Concept Note.

Notes
(1) PEFA is an abbreviation for Public Expenditure and Financial Accountability.
(2) I truly enjoyed reading this comment. It is written in a familiar language, with the requisite use of more-or-less incomprehensible terminology, very familiar to me after my years of working for the World Bank and in development cooperation more generally. It comes across as a project that may have been prepared, or that certainly should have been prepared. I cannot help but think that this is an interesting and far-reaching concept for a project. It is certainly one I would have been interested in working on. Given my past as a professional reindeer herder (not a joke), and many years working as a social development expert (including for the World Bnk), I believe I should be well qualified!
(3) For the record, there never was such a World Bank project, and – perhaps sadly – there will never be one.
(4) However, while the project may never have been identified, prepared, appraised, negotiated, presented to the Board, implemented, supervised, and evaluated (to refer to the steps in the World Bank's project cycle), several of the issues raised are key issues that are addressed in multiple World Bank projects across all sectors, be it past, ongoing, or pipeline projects. These issues are, inter alia, aid dependence, behaviour modification, capacity building and use of local people, climate change, decentralization of decision making, engagement with clients, ensuring that local people benefit, financial sustainability, gender, monitoring indicators, poverty focus, project management, pro-poor approach, stakeholder consultation, and user fees.
(5) Image credit: unknown, likely the US, from an old Chritmas card.
(6) A shorter version, more an introduction to the present article, was published on LinkedIn Pulse, 25 December 2018, at: https://www.linkedin.com/pulse/christmas-project-lars-soeftestad/
(7) Related Devblog articles: https://devblog.no/en/article/development-cooperation-sarcasm
(8) Permalink: https://devblog.no/en/article/world-bank-project-christmas
(9) This article was published 22 December 2018. It was updated 17 January 2019.