Robert Frost and Me (2): The Road Not Taken 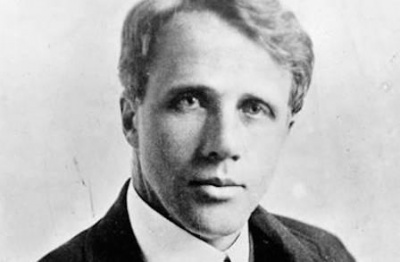 Robert Frost Speaks to Me and in Me (2):

"The Road Not taken"

Two roads diverged in a yellow wood,
And sorry I could not travel both
And be one traveler, long I stood
And looked down one as far as I could
To where it bent in the undergrowth;

Then took the other, as just as fair,
And having perhaps the better claim,
Because it was grassy and wanted wear;
Though as for that the passing there
Had worn them really about the same,

And both that morning equally lay
In leaves no step had trodden black.
Oh, I kept the first for another day!
Yet knowing how way leads on to way,
I doubted if I should ever come back.

I shall be telling this with a sigh
Somewhere ages and ages hence:
Two roads diverged in a wood, and I —
I took the one less traveled by,
And that has made all the difference.

If I was uncertain why I thought of the previous poem I posted (Note 4), this one came to me easily. In that poem, the person riding through a wintery landscape has set a course towards a goal - a place no doubt, but there is more waiting up ahead. The decision of which road to travel had been made, and it was a wise decision. As is the case also in this poem, there was a choice between two roads, and the one chosen made all the difference. I hope that I, if only in retrospect, will be able to say the same.

Notes
(1) This article was adapted from a post on Facebook.
(2) It is interesting that Frost apparently wrote this poem with a very different intention and meaning than the one given it in retrospect (Robinson, 2016).
(3) Relevant Devblog articles: "Stopping by Woods on a Snowy Evening", at: https://devblog.no/en/article/robert-frost-and-me-1-stopping-woods
(4) Image credit: Prints and Photographs Division, Library of Congress, United States.
(5) Permanent link. URL: https://devblog.no/en/article/robert-frost-and-me-2-road-not-taken
(6) This article was published 13 October 2019.