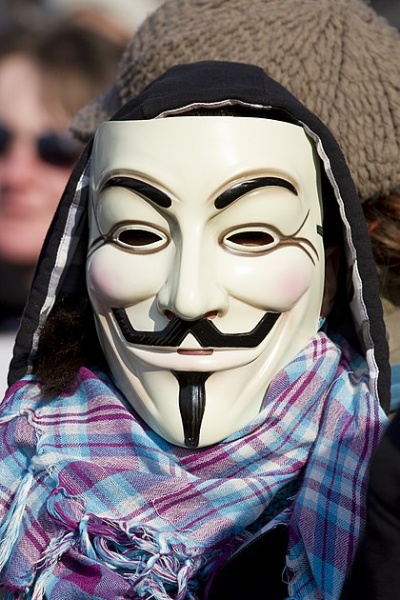 Guy Fawkes is the (in)famous member of the group behind the failed Gunpowder Plot in 1605. The group planned to blow up the House of Lords and assassinate King James on 5 November 1605. Yes, today's date. And, yes, there was a religious angle also here (Guy Fawkes was catholic and the King was protestant). The plot did not succeed. Since, on this date, the British celebrate Guy Fawkes Night or Bonfire Night, were straw-man effigies of Guy Fawkes wearing a mask are burned.

An alt-right website in the US today mentioned this story and this date, and tries to make a parallel with the aftermath of the US election; and possibly also a connection between Guy Fawkes and Donald Trump.

There is a possibility that the election for President will be done today (possibly with Biden winning), and the website wonders if it all will erupt in anarchy, chaos, and mayhem, as the Trump supporters will clash with Biden supporters. The website evidently see this as a parallel to what happened after Guy Fawkes and his comrades were found out. As I write this, fences are erected around at least one elections center, a group called "Stop the Steal" organizes to protest against vote counting (the group's Facebook page had more than 360,000 (sic) members before it was banned). Secret Service is ramping up protection of Biden. Trump's campaign and key Republication Party members are largely responsible for the increased level of conflict..

The website does not mention that Guy Fawkes was tortured, hanged, and quartered, and has been burned each year since 1605. There is also an interesting connection to the important role that Guy has come to play in popular culture. The main character in the film "V for Vendetta" impersonates Guy Fawkes and wears a mask that is a stylized depiction of Guy Fawkes (see image), and this contributed to a large extent to this mask becoming globally recognizable. The film "V for Vendetta" is set in a dystopian United Kingdom, and the mask is now used by numerous anti-establishment protest groups internationally, among them the hacktivist group Anonymous, Project Chanology, the Occupy movement, and Anonymous for the Voiceless. It is interesting to observe that these anti-establishment protest groups to a large extent target Trump.