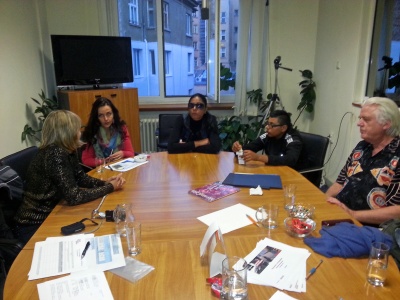 In the period 2014-2015 CBNRM Networking, a Norwegian NGO that I represent, was a partner in the project "Promoting democratic values with the TV program 'Short stories from the Roma world,'" implemented by Roma World - 21st Century, a Roma NGO (Note 2). The project received funding from the EEA and Norway Grants. The goal was to make films about Roma culture, in order to show the breadth and complexity of Roma culture and life. A number of families and individuals were selected among Roma living in settlements in Sofia. A total of 18 films were made, each 9-11 minutes in length. The main target group was Bulgarians, specifically the non-Roma part of the population. The project addressed democratic values (or lack thereof) in contemporary Bulgarian society, including the lack of space for media coverage on the Roma ethnic group in Bulgaria, and in Eastern Europe more generally.

The rationale for the project, at least how I interpret it, was based on the fact that discrimination and racism can be understood as a lack of knowledge about the other. In a situation were both groups live in the same country both parties will tend to make stories and construct truths, certainly on a subconcsious level, and truths about the other that are based on assumptions and beliefs and facts. In the case of Bulgaria, Roma and non-Roma live completely apart from each other. Specifically the majority category of non-Roma tend to know very little about Roma and Roma culture. This lack of knowledge, of what they assume to be true and correct, in turn leads to practices of discsimination and even racism.

This portfolio of films were not made by anthropologists. The filmmakers hired to make the films did not even have prior training in making ethnographic filmmaking. My main responsibility in the project was to give training to the film makers on what ethnographic film is. An important fact was that the founder and leader of the Roma NGO herself is Roma. I venture to caracterize this body of films as ethnographic films, as this term has been defined as a "non-fiction film, often similar to a documentary film, historically dealing with non-Western people, and sometimes associated with anthropology" (Wikipedia n.d.).

As far a publishing the films, and reaching out to the main target group, the hoped-for outlet was one of Bulgaria's TV-channels. There were also ideas to sell them to Norwegian TV channels, as well as promote them via international film festivals. Unfortunately none of this materialized. As far as promoting the films and the underlying message, the project accordingly had to resort to posting the movies on YouTube (Note 3). In connection with writing this article I posted the movies on my company Supras' channel on Vimeo (Supras Ltd. n.d.).

Making ethnographic films, in this case about Roma life and culture in Bulgaria, seems to be easy compared with finding a use for them. That is,  finding outlets that focus on and support using such films in educational and informational contexts, and/or in advocacy campaigns is not easy. One explanation for this is that there is no interest or demand in such approaches.

The fund operator, EEA and Norway Grants, has given the following assessment of the bilateral results of the project (Norway and EEA Grants n.d.):

"The implementation of the project led to improved knowledge and mutual understanding between the two organisations. The transfer of knowledge and experience was in both directions – from the CBNRM Networking-Norway to the team of Roma World 21st Century and vice versa. CBNRM Networking elaborated written recommendations with suggested good practices for promoting democratic values – from Norway and consulted the creative and filming team. Thus contributed to the development of the creative concepts and filming of the videos. The organisation has also contributed to the publicity of project’s products by sending information to NGOs with relevant to the project activities from Norway and other countries. So the TV program 'Small stories from the Roma world' was promoted outside of Bulgaria and helped for the positive change of attitudes towards Roma people and and their life style."

In my estimate the listed outcomes of the project may have been overrated.

Notes
(1) At the time when the project was implemented Roma World - 21st Century had a website (http://romaworld21.net) as well as a Facebook page (https://www.facebook.com/romaworld21). When this article was updated (Sept. 2018) they were not available.
(2) The number of views of the films on YouTube have been abysmally small.
(3) Image credit: Lars Soeftestad, Supras Ltd. The photo shows a meeting of the project management staff.
(4) Permalink.URL: https://devblog.no/en/article/ethnographic-film-and-advocacy
(5) This article was published 31 July 2016. It was revised 24 September 2018.