Empathy with the World's Poor 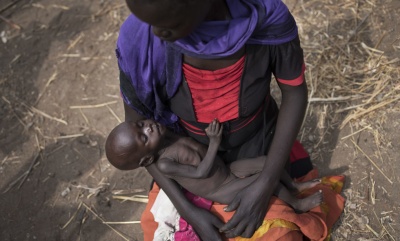 Empathy with the world's poor and with hunger appear to decrease, as reported by several media. An article in the Norwegian daily "Dagbladet" reports on humanitarian crises in Jemen, Nigeria, Somalia and South Sudan, with more than 20 million persons affected by hunger, or that may be affected by hunger (Dagbladet 2017). According to UN this is the largest humanitarian catastrophe in the world since the end of World War II. This contrasts sharply with the degree of focus on these crises. Both donors and people in the Western World in general have a very small focus on this. Voluntary contributions are largely missing. It is assumed that more than 450 million USD are needed in immediate aid, but only a small part of this is available. The two most important explanations for this dearth of funds is given as being warfare and civil war, together with a near permanent global focus on Donald Trump and the fuss around him.

At this point I begin to have problems following the argument. An analysis of the explanations that are put forward, with a focus on the differences between internal and external factors, their geographic localization, and the societal level at which they operate, may be of some help.

(A) Internal Factors. These factors operate on local and regional societal levels. They belong in two different categories: (i) environmental factors, for example, draught and climate change in general, and (ii) anthropogenic factors, for example, inept dictatorships, that food and food aid become part of a power game between political or ethnic based groups, and local warfare and civil war. These factors can lead to synergy effects, for example, that people emigrate, what in turn can lead to conflicts and contribute to cause and maintain hunger. Another type of synergy effect are diseases, for example, cholera outbreak. A third type are the long-term effects of malnutrition. We can do very little with the factors in the first category. As for the factors in the second category we can, in principle, address them, but achieving results is often very difficult. The factors in both categories have in common that they: (i) often begin and function on macro-levels while having consequences at local levels, and (ii) largely lie beyond the external world's ability and possibility to intervene. They to a large extent explain why hunger and famine arise and are maintained.

(B) External Factors. These are factors that as a rule originate and operate outside of the regions and countries in which humanitarian catastrophes occur. Donald Trump's daily actions are, as mentioned, understood to be an important factor. The same goes for warfare and civil war, here understood as regional conflicts that takes place outside of the countries where humanitarian catastrophes occur, but that impact the political and economic situation in these countries. A third factor is the argument that mass media do not write abot this, do not write enough, or else do not write correctly about these events.

A fourth factor is political-economical. Its consequences intervene directly at the local level and contribute to causing and maintaining humanitarian catastrophes. Such consequences result from conscious decisions, and they are probably in most cases unforeseen and not planned. The hunger catastrophe in Bengal i 1943 has been characterized as a direct consequence of conscious actions (Wikipedia n.d.a). Of a population of 60 million as many as 2-3 million died from hunger, malaria, and other diseases, aggravated by lack of health care, malnutrition, population displacement, and unsanitary conditions. Millions were impoverished.

It is, however, not so simple that these four factors, alone or jointly, lead to hunger and humanitarian catastrophes. Other factors will also be involved. For example, early hunger can have a feedback effect on one or all of the four main factors. When it comes to explanations for the decreasing interest in humanitarian catastrophes, in particular in countries in the West, the conclusion is that external factors to a large extent contribute to explaining this.

I have problems understanding how these factors can explain the low level of empathy as regards hunger and humanitarian catastrophes. How Trumps activities should have an impact is difficult to comprehend. Regional and local conflicts and civil war should encourage people to increased efforts rather than the opposite. Likewise, to blame mass media does not make sense. There is no shortage of mass media that focus on hunger, descriptively as well as analytically.

We have to take the responsibility ourselves for not being cognizant about this, or for not being able to – or wanting to – be aware of it. To blame it on external and unrelated factors is simply not acceptable. It appears that we tend to focus on things and issues that are close to us, and that are positive, as a result of both conscious and subconscious choices. The consequence is that we increasingly isolate ourselves from what happens in faraway places, certainly if it is negative. Local and often insignificant occurrences become more interesting and important, to the exclusion of large and important occurrences internationally. We crave for good and positive news.

Many will recall when they first saw photos of starving children. There are two such photos that I simply cannot forget. One shows a starving child lying on the ground with a vulture waiting nearby (Note 2). The other shows a dead child lying on a beach (Note 3). Both photos were distributed widely internationally and contributed in a major way to increasing our understanding for hunger and humanitarian catastrophes, as well as for the refugee situation in Europe. The second photo resulted in a dramatic – if only short term – increase in contributions to organizations that worked to help migrants and refugees.

Is this what is necessary in order for us to show responsibility and contribute to address humanitarian catastrophes? More awful photos of starving, dying, or dead children? Is it possible that we no longer react – or can react – as before? That more and stronger visual imagery is necessary? It may seem that many have reached a point of saturation when if comes to human suffering, where the underlying logic is that it happens so far away, that it really does not concern us, and that there in any case is so little each of us can do. This may be a consequence of the fact that we live in societies where a focus on the individual – maybe even egoism – increasingly is apparent. Words like altruism, humanism, and compassion are saved for special occasions only, for example, in pompous speeches.

I see this in myself. I work professionally with development aid, and have witnessed more misery and suffering than most. This affect ones personality and psychological make-up, the ability to emphathize with each and every human fate one encounter. Over time it becomes difficult to show the same level of compassion. It is easy to become blunted. The Norwegian poet Arnulf Øverland expressed this very clearly in a poem (my translation): "You must not tolerate so well the wrongdoing that does not affect yourself!" (Note 4). What can we do, individually and collectively, to change our views on and relationships with the world's misery and suffering?

Notes
(1) This article is a revised version of a contribution to a debate on Facebook on 6 August 2017. The point of departure was an article in the Norwegian daily "Dagbladet" on 2 July 2017 (Dagbladet 2017).
(2) "The vulture and the little girl" or "Struggling girl," by Kevin Carter, a South African photojournalist. Location: Ayod, Southern Sudan (today in Fangak State, South Sudan). Date: 1 March 1993. First published in the New York Times, 26 March 1993. It won the Pulitzer Prize for Feature Photography in 1994. In the aftermath information around the photograph has come to light. The child's parents were at the plane that had just landed (and which Kevin Carter had arrived on), to get needed food supplies. The child received food aid and survived, and died around 2007 from unrelated causes. Kevin Carter committed suicide in 1994, soon after receiving the Pulitzer prize. His suicide note reads, in part: "I am haunted by the vivid memories of killings and corpses and anger and pain" (Wikipedia n.d.b, n.d.c).
(3) Alan Kurdi was a three year old Kurdish boy from Syria who drowned on 2 September 2015 near Bodrum on Turkey's southern coast. He was onboard a boat with refugees that capsized en route from Turkey to the Greek island of Kos (Wikipedia n.d.d).
(4) Arnulf Øverland (1889-1968). From the poem "Du må ikke sove." The verse lines read: "Du må ikke tåle så inderlig vel den urett som ikke rammer deg selv!"
(5) Image credit: AP / NTB Scanpix. It is from South Sudan. It is available in the article in Dagbladet (2017).
(6) Relevant Devblog articles: "Empati med verdens fattige" at: https://devblog.no/no/article/empati-med-verdens-fattige
(7) Permalink. URL: https://devblog.no/en/article/empathy-worlds-poor
(8) This article was published x. It was revised 15 August 2018.