Africa and the Mercator Projection: Misconceptions 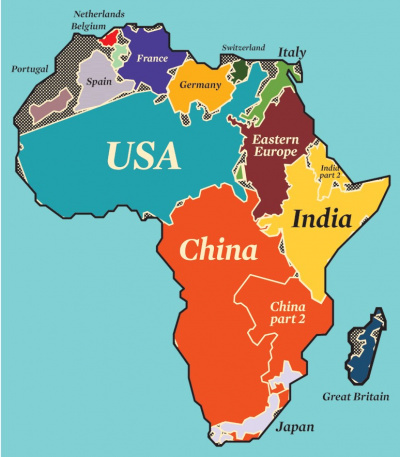 This is a companion article to
"Africa and Map Projections"

I have gone through the 600+ comments (SIC!) in the LinkedIn post "The World in Africa" (LinkedIn 2021), and extracted many – but far from all – of these more or less completely incorrect – in some cases hilarious – efforts to understand or interpret what the map means (Map 1). For a further disussion see the accompanying article (Devblog 2021).

In addition to comments that tried in vain to understand this map, many went off on completely irrelevant subjects (for example geopolitics, on the perceived mostly problematic presence of China in Africa). Many were repetitious, for example, critisizing the map for not including specific countries, for example, Russia. Many addressed the perceived incorrect difference – made or implied – between continents and countries, and why this or that continent or country was / was not included, while several focused on the fact that "Eastern Europe" is neither a continent nor a country. Enough said. Here goes (Note 2):

Notes
(1) This article contains comments in a LinkedIn post "The World in Africa", in December 2021 (LinkedIn 2021). My views on these comments are available in a companion article on Devblog (Note 3).
(2) About the comments: (i) They are listed in the order in which they appear, (ii) They refer, implicitly or explicitly, to the map in this article, (iii) Grammar, syntax, and spelling mistakes have, for the most, been corrected (with exceptions for language where it was difficult or not possible to get at the real meaning), and (iv) They are largely presented as written, that is, they are quotations.
(3) Image credit: Ian Bremmer, Eurasia Group.
(4) Relevant Devblog articles: "Africa and Map Projections" at: https://www.devblog.no/en/article/africa-and-map-projections
(x) Other Devblog articles: "x" at:
(x) Permalink: https://www.devblog.no/en/article/africa-and-mercator-projection-misconceptions
(x) This article was published 27 December 2021. It was revised 3 January 2022.